I have some pretty nerdy interests (not surprising for someone who blogs about aliens and conspiracies), but it wasn’t until I met my partner that I entered the shameful world of RPGs. Not wanting to disgrace myself alone, I quickly dragged down some of our friends, and we now get together on a semi-regular basis to play Dungeons & Dragons, RuneQuest, Mutants & Masterminds, and whatever other random game temporarily grabs our interest.

Our group is pretty relaxed, so we usually end up drinking a lot and trying to screw up the GM/DM’s carefully laid plans. For arseholes like us, there’s no greater satisfaction than seeing the gut-punch expression on our GM’s face when we insta-kill a boss monster by stabbing it in its enchanted shin, or talk some maniac out of beheading us simply by being adorable. It’s not the success or violence we enjoy, but shitting all over something that one of our friends has spent hours working on. That’s just the sort of people we are.

Arseholery aside, you may wonder where my initial interest came from. I’m not really a huge fan of video games or the fantasy/sci-fi genres, so how did I even learn that D&D existed?  Well, from movies like this:

The “sensational conspiracy of murder” was hatched between 20-year-old Chris Pritchard and two of his college friends, who plotted to kill Pritchard’s mother and stepfather (Bonnie and Lieth Von Stein) so that he could make an early claim on his $2 million inheritance.  The three young men attacked the Von Steins one night while they slept; Bonnie Von Stein was badly injured, and Lieth Von Stein was killed.

The “sensational” part of the crime was not the cold-hearted greed or the privileged background of the perpetrators, but the fact that they played Dungeons & Dragons together. This united them in a Satanic pact of blood and death that blurred the lines between fantasy and reality… supposedly.

The Pritchard crimes were committed in 1988, after almost a decade of D&D hysteria. Groups such as BADD (Bothered About Dungeons and Dragons, which is quite an understated name when you consider their accusations) claimed that the game was addictive, dangerously absorbing and lured unsuspecting children into witchcraft and devil worship. Concerned (paranoid) citizens (lunactics)  distributed pamphlets, went on talk shows and even wrote books to spread the word and try to get the game banned.

The propaganda was ridiculous. Check out these brilliant examples:

According to these sources, as well as some contemporary news reports, more than a few teachers, psychiatrists and law enforcers shared BADD’s fears. One of my absolute favourite quotes is from the 1988 book Stairway To Hell by Rick Jones (whoever that is). In it, an ex-police officer/occult lecturer is reported as saying that D&D is “..supposed to be a board game, but kids play it for life and death on the street.” 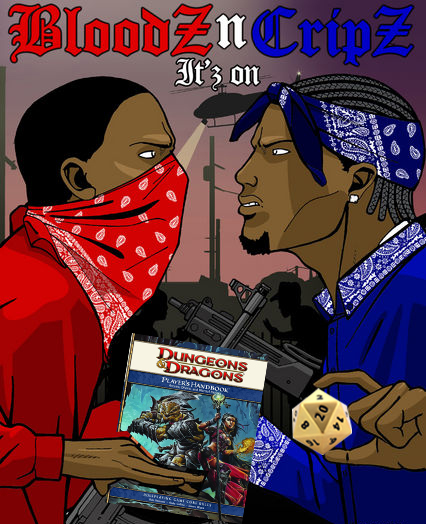 Please let this be true, and please, PLEASE let someone turn it into a movie starring Michelle Pfeiffer and Lauryn Hill.
(Original image source: hiphopisland.com)

God, how I wish these ideas were true. One of my characters is a halfling cannibal druid who morphs into a honey badger during combat – I would be crazy to turn down that sort of power! But, alas, all D&D has ever taught me are some basic flanking rules and the average number of standard drinks it takes to make our Irish friend fall asleep mid-sentence (hint: it’s a lot).

The freak-out over Dungeons & Dragons was really an offshoot of Satanic Panic, which had spread throughout the US and other countries following the McMartin Preschool trial and the release of the (now discredited) autobiography Michelle Remembers. Most of the controversy died during the late ’90s, when the various Murdoch newstatorships very kindly gave the public other things to be scared of. However, the odd story still pops up.

To me, the irony of moral panics is that it is often much scarier to be a part of the demonised group (ie: a D&D player or “Satanist”) than the supposedly terrorised majority. In a column titled  How We Won the War on Dungeons & Dragons, Annalee Newitz recalls how some young gamers were “..ostracised by their peers, kicked out of public schools, and sent to glorified re-education camps by parents who feared their children were about to start sacrificing babies to Lolth the spider demon.”

Kicking people out of schools? Re-education camps? I’m so glad we don’t do that anymore!